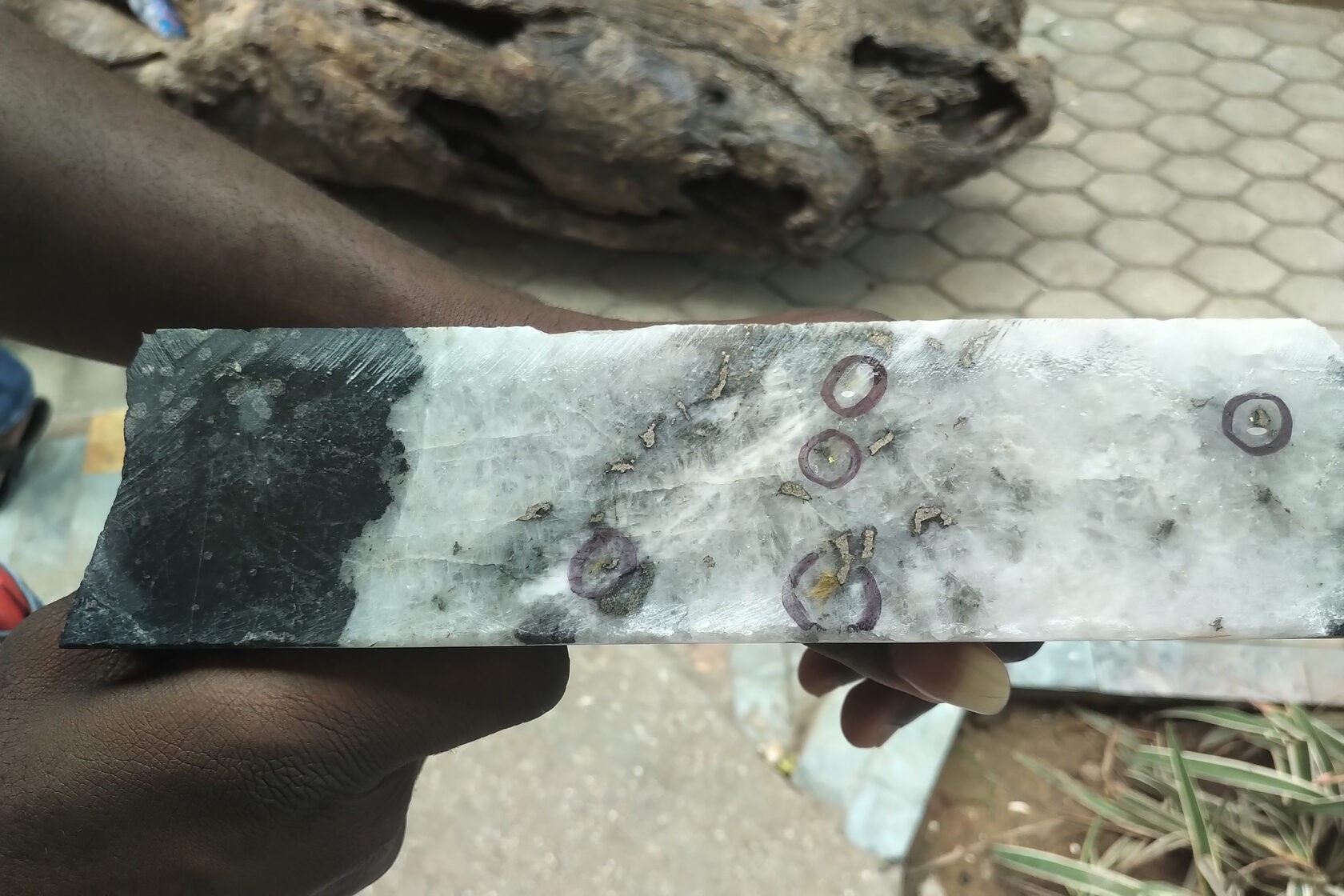 THIS NEWS RELEASE IS NOT FOR DISTRIBUTION IN THE UNITED STATES OR TO U.S. NEWS AGENCIES

Vancouver, British Columbia – March 22, 2021 – Asante Gold Corporation (CSE:ASE/FRANKFURT:1A9/U.S.OTC:ASGOF) (“Asante” or the “Company”) announces that assays have been received for the first hole of a three-hole geotechnical drill program at our Kubi Gold project in Ghana. DDHK21-001was collared approximately 100m to the north of the Kubi Pit, near the middle of the *Kubi Main Mineral Resource. On this section gold mineralization has been previously outlined to a depth of 450m, the gold is free milling, and occurs within a near vertical 1km long by 1m to 15m thick shear bounded ‘garnet’ zone. Gold is associated with up to 30% garnet and 15% sulfide mineralization and as coarse gold in late quartz veins ( Figure 1).

Given the presence of visible gold and the numerous high assays received,  samples have been re-submitted for screened metallics assay which give more exact results when coarse gold is present. Further results will be announced as received.

The Company also announces that the CAD$5.0 million private placement announced on March 16, 2021 has been oversubscribed, and the Company has accepted a further CAD$2.0 million of subscriptions for a total of CAD$7.0 million, and closed the ‘book’. Proceeds from the placement will be used for working capital, and for the exploration and development of the Company’s Kubi, Fahiakoba, Betenase and Keyhole gold projects in Ghana.

The Company is also pleased to announce the appointment of Mr. Malik Easah as an Executive Director. Mr. Easah was a founding Director of Cardinal Resources Limited where he spearheaded the acquisition of all tenements and played a key role in the discovery and development of the seven million-ounce Namdini Gold Project in Northern Ghana. Cardinal was recently purchased by Shandong Gold Company for ~AUS$600 million. Mr. Easah has over fifteen years of exploration, mining and project development experience, is resident in Accra, Ghana, and has subscribed for CAD$500,000 of the placement. Mr. Easah is the husband of Nadia Abdul-Aziz, a non-Executive Director of the Company.

Scientific and technical information contained in this news release has been reviewed and approved by Douglas R. MacQuarrie, P.Geo. (B.C.) Geology & Geophysics, the President and CEO of the Company, who is a “qualified person” under NI 43-101. DDHK21-001 is located at WGS84 Z30N 640978E  664619N, azimuth 284.5 deg, and dip -76.5 deg. The HQ core was logged, sawn and sampled by our staff at our core logging facility in Dunkwa, Ghana, with quarter core samples sent to SGS Laboratory Services GH Limited in Tarkwa, and analyzed for gold by fire assay prep and AA finish on a 50 gram sample charge. QC consisted of inserting both blanks and standards into the sample stream and multiple re-assays of selected anomalous samples. Results from past drilling and the QC program suggest that the reported results are accurate. Intercept lengths reported are core lengths, true widths are estimated at 25 percent of intercept lengths. *The Kubi Main Zone has a current NI 43-101 mineral resource estimate, completed by SEMS Exploration Services Ltd. of Accra, Ghana: Measured Resources 0.66 million tonnes @ 5.30g/t for 112,000 ounces; Indicated Resources 0.66 million tonnes @ 5.65g/t for 121,000 ounces; and Inferred Resources 0.67 million tonnes @ 5.31g/t for 115,000 ounces, which is filed on SEDAR. Mineral resources that are not mineral reserves do not have demonstrated economic viability.

About Asante Gold Corporation
Asante has announced plans to co-list its shares on the Ghana Stock Exchange and is sourcing funding to develop its Kubi Gold Mine project to production. Asante is also exploring its’ Keyhole, Fahiakoba and Betenase concessions/options for new discoveries, all adjoining or along strike of major gold mines near the centre of Ghana’s Golden Triangle. Additional information is available on our web site at: www.asantegold.com

Neither IIROC nor any stock exchange or other securities regulatory authority accepts responsibility for the adequacy or accuracy of this release. LEI Number: 529900F9PV1G9S5YD446.

This will close in 0 seconds