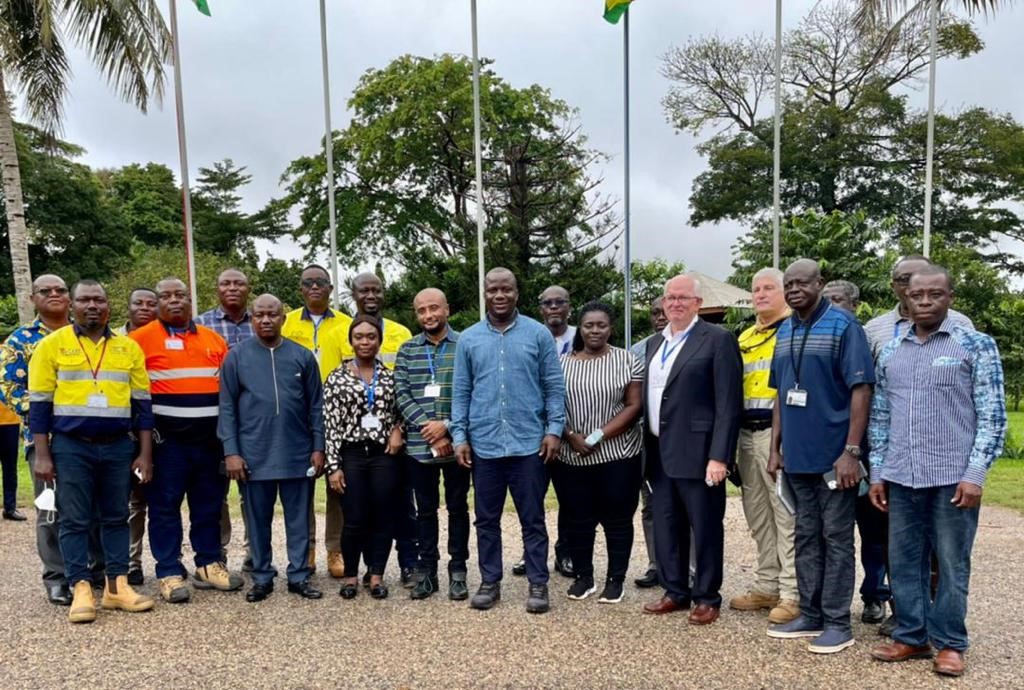 Samuel A. Jinapor in a group photo with officials of the company ( Malik Easah, Dave Anthony, Dean Bertram).

Samuel A. Jinapor, the Minister for Lands and Natural Resources on Wednesday, 22nd September, 2021, paid a working visit to the Asante Gold Corporation, a mining company formally known as Mensin Gold during his one-day tour of the Western North Region, to ascertain their level of operations and also to assure them of governments commitment to help them fully maximise profit.

The Minister in his submission, noted that the initial commitment made by the company indicates they needed government’s commitment to help revamp its operations. The Minister expressed his joy over strides the company has made in such a short time considering the challenging state in which it was handed over to him as Minister. He said, “With no discrimination intended but this is the happiest visit that I am making” Hon. Jinapor maintained that he is fervently looking foward to leading the President of the Republic, Nana Addo Dankwa Akuffo-Addo to visit the Mine and pour the first gold.

In his presentation, the Chief Operating Officer of the Bibiani Gold Project, Mr. Dave Anthony disclosed that the project will employ some 300 more workers as an add on to already 138 employed since August 19, 2021. 39.1% of the company is owned by Ghanaians and this the Mr. Anthony said is a feet worth celebrating as no African mining company can boast of same. He said, ” I don’t think there is a single mining company in the world other than Canadian, American and Australian companies that can make such statements” In sharing the prospect, he also noted that the operations of the mine will yield the needed dividends if government support their operations.

The Board Chair of Mensin, Mr. Kwame Ofosuhene Apenteng, on his part, expressed his gratitude to the Minister for the good works he has stated and asked for a fiscal concession in the already made agreement between government and the company. He also gave the assurance that for the trust reposed in them, his company will not go back on their words of hard work but deliver on the mandate given. He said, ” This is a promise that I’m giving to you, that we are not going to disappoint the Ghana Government, we are not going to disappoint You, the Minister who led us to this point and we are not going to disappoint the Bibiani community”. The Bibiani mine was in a near-folding up situation when Asante Gold Corporation purchased it last month. Asante Gold agreed to buy all of Resolute’s interest in Bibiani, through the purchase of 100% of the shares in Mensin Bibiani Pty Ltd by paying to Resolute

This will close in 0 seconds